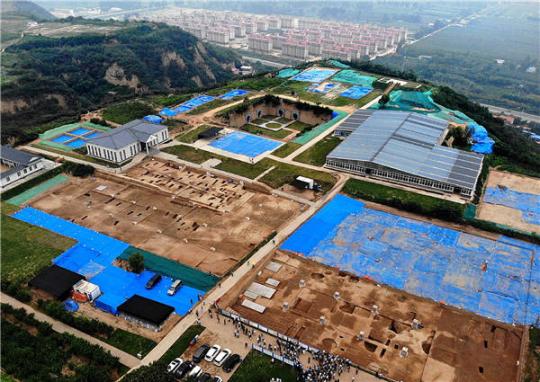 An aerial view of Shuanghuaishu site in Gongyi, Henan province, where the country's oldest palace has been discovered. (Photo/Xinhua)

Archaeologists in China have uncovered what appears to be the nation's oldest palace in Central China's Henan province, extending China's history of constructing palaces by about 1,000 years.

The ancient palatial dwelling was found at the Shuanghuaishu site, which is believed to provide further proof of the origin of Chinese civilization more than 5,000 years ago, according to Wang Wei, president of the Chinese Society of Archaeology.

The ruins were built on a high rammed earth platform that covers around 4,300 square meters and is laden with foundations for structures.

Among the structures that were once built upon the platform, the excavation work has unveiled the clear layout of two compounds. At the western side of the platform lies a rectangular-shaped courtyard, outside of which, past the south wall, a nearly 880-square-meter grand square has been unearthed. The discovery suggests a typical ancient palace layout, where the administrative area for the royal court sat in front of the residences.

The other courtyard situated on the eastern side of the site covers around 1,500 square meters, with three stately gateways, according to Gu Wanfa, director of the Zhengzhou Municipal Research Institute of Cultural Relics and Archaeology.

"The spatial arrangement of such large courtyards and the palace city, which places the administrative area in front of the royal family's living area, created a precedent for palace design in China," says He Nu, a researcher with the Chinese Academy of Social Sciences, adding that the layouts directly affected the planning of the capital cities of the following dynasties, including the Xia (c.21st century-16th century BC) and Shang (c.16th century-11th century BC).

Previously, archaeologists excavated what was then the country's earliest ancient palace at the Erlitou relics site, which served as the capital city for the middle and late periods of the Xia Dynasty, China's earliest known dynasty. The latest discovery is expected to bring the establishment of China's palace system to an earlier date.

With an area of 1.17 million square meters, the Shuanghuaishu site is located on the south bank of the Yellow River in the township of Heluo, the city of Gongyi, Henan. It was the capital city of an ancient "Heluo kingdom" dating back around 5,300 years, testifying to the origin of Chinese civilization.