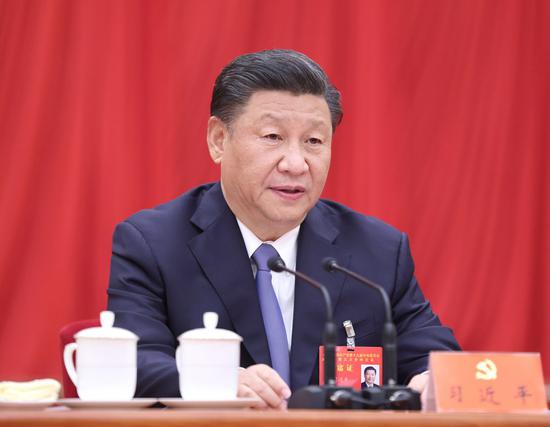 Xi Jinping, general secretary of the Communist Party of China(CPC) Central Committee, makes an important speech on Oct.29, 2020 at the fifth plenary session of the 19th CPC Central Committee in Beijing, capital of China. The session was held in Beijing from Oct. 26 to 29, 2020. (Xinhua/Ju Peng)

Pioneering China's development as the leader of China's ruling party, Xi Jinping has been steering the Communist Party of China (CPC) to enhance friendship, promote exchanges with foreign political parties, and work with political parties worldwide for the global good.

Under the dual capacities of Chinese president and general secretary of the CPC Central Committee, Xi has undertaken three overseas visits and received visiting leaders and representatives of foreign political parties on around 40 occasions in the past eight years.

The CPC is the largest political party in the world and will embrace its centenary later this year. It has been an earnest champion of a new mode of party-to-party relationships, advancing the sound and stable development of international relations.

So far, the CPC has maintained regular contact with more than 600 political parties and political organizations from over 160 countries and regions around the world.

Political parties play an important role "in the progress of human civilization," Xi said at the opening of the CPC in Dialogue with World Political Parties High-Level Meeting held in Beijing in December 2017. It was the first-ever gathering of political parties worldwide, and Xi stressed there that the CPC is ready to "make more friends across the world."

To facilitate state-to-state relations by way of enhancing intra-party friendships, Xi has in recent years engaged in various forms of interaction with leaders of foreign political parties.

In 2017, Xi invited General Secretary of the Communist Party of Vietnam Central Committee Nguyen Phu Trong for tea at the Great Hall of the People, where they discussed the similarities of the Chinese and Vietnamese cultures and exchanged ideas to enhance the traditional friendship between the two peoples.

In September 2019, when China was celebrating the 70th anniversary of the founding of the People's Republic of China, Xi conferred the Friendship Medal on Raul Castro Ruz, first secretary of the Communist Party of Cuba Central Committee, lauding his contribution to China's development.

The mechanisms for dialogue between the CPC and other political parties have been constantly improving. Occasions such as the China-Arab States Political Parties Dialogue Extraordinary Meeting and the UK-China Leadership Forum have added mutual trust, resilience and vitality to the CPC's relationships with foreign political parties.

"The landscape of the CPC's international work is developing toward one that is more comprehensive and wide-ranging, running via multiple channels at a deeper level, with an expanding circle of friends," Song Tao, minister of the International Department of the CPC Central Committee, said in an interview.

The Chinese economy is forecasted to register 1.9 percent growth in 2020, faster than most of the largest economies, as efforts to contain COVID-19 and support recovery have paid off, according to the International Monetary Fund.

As China has blazed a development path that suits the country's actual conditions under the leadership of the CPC, more political parties are keen to learn from China's success to contribute to the progress of their own respective countries.

Noting China's development will create more opportunities for the world, Xi said that China "will draw on our own practices to explore the laws governing the evolution of human society and share with other countries what we have learned" at the high-level meeting in 2017.

The CPC has engaged in exchanges of various forms with foreign political parties over governance and reforms. In one such exchange, Bounnhang Vorachith, former general secretary of the Lao People's Revolutionary Party Central Committee, visited villages in China's Hunan and Fujian provinces to learn about targeted poverty alleviation, considering similar practices back in Laos.

Drawing from the CPC's experience, Raphael Tuju, secretary general of Kenya's ruling Jubilee Party, said the party is exploring the possibility of establishing a party school to inculcate a culture of discipline among party members. Six parties in southern Africa co-founded the Julius Nyerere Leadership School in 2018 to strengthen self-construction and improve their governing capacity.

The CPC has become a model for wise governance and also for the positive management of ideological, political and organizational issues, said Ilyas El Omari, former general secretary of the Authenticity and Modernity Party of Morocco.

A COMMUNITY WITH A SHARED FUTURE FOR MANKIND

The COVID-19 pandemic is continuing to wreak havoc across the world, with a total of more than 92 million cases and a death toll topping two million as of Saturday, and cases continue to surge.

"The COVID-19 pandemic has once again proved that mankind is a community with a shared future that shares weal and woe," said Xi in a letter to World Health Organization Director-General Tedros Adhanom Ghebreyesus.

While leading the Chinese nation in successfully containing the coronavirus, the CPC has shared China's COVID-19 response plans as well as diagnosis and treatment solutions with over 400 political parties, and has provided medical supplies and technical support for political parties and organizations in need, bearing the welfare of all peoples in mind.

The pandemic, interwoven with profound changes unseen in a century and other emerging global challenges, calls for greater responsibilities shouldered by political parties worldwide.

The CPC will strive for "a new mode of party-to-party relationships, seeking mutual respect, mutual learning and common ground while shelving differences. The party will continue to promote mutual understanding and mutual trust among countries, political parties and peoples, to strive for a community with a shared future for mankind," said Song.